Episode 2: Clash of the Corn Cuties

"Think of the corndren!" ― Kristen Applebees

The Corn Ooze and Corn Gremlins ("Cuties") are enemies from Clash of the Corn Cuties and fought alongside Doreen.

The Corn Ooze is described as a monstrous, pulsating mountain of creamed corn. It moves like a pseudopod and has sphincters (assholes) all over its body where it births new Corn Gremlins every other round. When it consumes more corn, it grows in size and heals itself of all damage.

Episode 2: Clash of the Corn Cuties

The Corn Gremlins, or Corn Cuties, are flying cobs of corn with malevolent eyes and wide mouths. They have butts and are undeniably adorable, no matter how horrifying Brennan tries to describe them as. They look like they're wearing slipper pajamas or little grasshoppers. They attack with their serrated leaf claws, and when they die, the corn kernels fall off, and their husks dry and wither. Two of them are capable of lifting Fabian off the ground, which means that it's possible that each Corn Cutie is able to lift at least 100 pounds.

As the Bad Kids rush into the cafeteria after hearing Doreen scream, they find these creatures surrounding her. They are the catalyst event to the rest of the story as they are the first indication something bad is happening in Elmville.

The Corn Ooze emerges from a barrel of creamed corn in the kitchen and begins to head towards the pantry as the Bad Kids start their attack. It ignores them completely in favor of knocking down the pantry wall until Fabian stabs it with his rapier, piercing something inside.

Riz latches onto this clue and dives head first into one of the Corn Ooze's butt holes. Inside the monster, he finds the cursed scroll. He attempts to rip it, but reconsiders after a failed wisdom saving throw, as it could be an important clue.

Two Corn Cuties pick Fabian up by his legs and drop him into the Corn Ooze's mouth. Gorgug slashes open the front of the Corn Ooze, and Kristen tries to stick her arm in to get Riz out, but does not succeed. Fabian successfully escapes and reaches in to rescue Riz, fighting off Corn Cuties as he does so. Fabian and Riz's hands finally find each other and Riz is pulled out like Predator, but not before the Corn Ooze swallows some more corn and heals its wounds.

After she was unable to cast it on the Corn Ooze, Adaine casts Friends on one of the corn cuties and convinces it to attack the one next to it. Once Riz is pulled out, she uses Mage Hand to grab the paper, and Riz shoots it, destroying the paper and the corn monsters.

Over the course of the battle, fourteen Corn Cuties spawn, five of which were present from the first round. Seven are killed during combat, the first of which by Riz, four by Gorgug, and two by Fabian. Riz also shoots the cursed parchment that animated them and destroys it, killing the rest of them. The Corn Cuties are able to knock out Adaine, Gorgug and Fabian. Adaine is healed during combat, and Fabian is stabilized after the corn monsters are defeated, but Gorgug fails his saving throws and perma-dies.

Dishing with a Demon[]

The Bad Kids find out later, after talking with Gorthalax the Insatiable, that the Corn Ooze and Corn Cuties were created by accident. The hellmouth page that animated them was meant for Kristen, as it was slipped into her bible by Zayn Darkshadow, but Ragh Barkrock interfered by throwing the bible into the drum of corn. It was left behind when Adaine fished the bible out with Mage Hand. 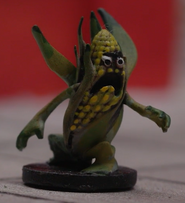 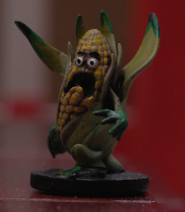 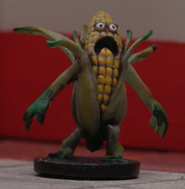 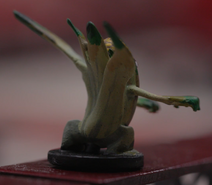 "They got little butts!" -- Emily Axford
Community content is available under CC-BY-SA unless otherwise noted.
Advertisement